7 Things to Not Say During a Discovery Call

Get Started within 30 secs

Discovery call – a revelation about your prospect :

In the world of sales, a discovery call sets the stage for an SDR who is ready with a perfectly scripted sales story to put across to the fastidious prospect waiting to show the backdoor for poor performers.

A discovery call as the name implies is meant to discover details about the prospect. It is a two-way conversation where an SDR determines whether the given prospect would qualify to be a good fit for the product and also ensure he/she brings value to the prospect. It has to be a win-win for both parties.

A discovery call should aim to ease the status quo, establish the salesperson as an authority and an expert in the product also help explicate empathy in understanding the pain points of the prospect.

According to State of conversation intelligence, “32% of cold calls will turn into discovery calls, and 19% of those will eventually become Closed Won deals”

Check out to know more on tips to master cold calling.

There are numerous guides, help docs and books that speak volumes on acing discovery calls, but it is still a challenge for the SDR to pull off the initial extended conversation with the prospect.

Therefore we decided to take a bottom-up approach and attempted to state things in a slightly unconventional way so that it sticks.

Let’s look at things that a sales rep should refrain from saying or doing during his initial interaction with the prospect.

# Don’t ask what you already know

The term discovery means to uncover things you probably didn’t know about your prospect or that you will dig deep to find so that you can match your value proposition along those lines. So don’t ask questions for which you could have your answers from the internet. Instead, please do your research and ask them open-ended sales questions eliciting information that gets you more than two words.

Could you describe the issue for which you are looking at a potential solution?

Prospects tend to spill out additional information with these kinds of questions. Watch out for them as they can be used as talking points later.

You heard me right; discovery call should never be mistaken for a monologue (remember we called it a two-way conversation!). Research from Gong.io and Salesloft says that the average talk-to-listen ratio during discovery calls is 46:54 (so they’re talking for 46% of the time and listening for 54%): It is also equally important to space out your questions through the call. Sales reps who front-load questions often give the feeling of interrogation to the prospect and make the prospect end the call quickly. Keep the conversation free-flowing and allow the prospect to get comfortable with you.

# Don’t pop the question, yet!

If it is unlikely that you’d pop the question on your first date, then it’s best to not ask for a demo during your initial conversation with the prospect either.

You have got to be consultative during a discovery call to gain as much information possible regarding prospects pain points, goal, budgets and the like. Another downside in trying to squeeze in a demo inside of a discovery call is the risk of rushing the understanding phase and eventually demo as well, which could be a real catastrophe.

Instead, you could lead them to the ask with the following questions :

“Say, you don’t do anything to make the current situation any better, what would happen? Would you like to discuss if we could do something about it maybe next week with a short presentation?”

“What objective are you looking to accomplish before our next meeting?”

“If you’d like, can you, I and your other stakeholders connect next week?”

# Don’t jump in without an agenda:

A discovery call without an agreed clear purpose and result is an exercise in vain. Establish to the prospect what is the purpose of the call. What is the outcome you are looking at (other than a close or demo)? It will clear the air for the prospect, and prospects won’t feel pressured to be obliged to say a ‘yes’ at the end of the call.

“Usually, a call like this will help us understand the next step forward and how best our solution would fit you. If you have any questions or feel it may not be suitable at any point during the call, please let me know.”

“The agenda points will hover around x,y,z..would you like to add anything?”

The discovery call will set the tone for a relationship with your prospect. That said, don’t get carried away in the conversation and miss the pain point. It is crucial that you look for challenges that prospects may or may not spell out explicitly. It is a good idea to look for emotion markers to decipher the issue they are struggling with:

If you ask “What kinds of results are you seeing for a newly implemented sales strategy?”

And you hear the prospect explaining the strategy and in between remarks “I have done everything but looks like the results aren’t coming through which is kinda frustrating.”

There you have it! “Frustrating” – tells you the prospect is unhappy/disappointed with unmet targets. Any solution that can help him push that up will motivate him to buy.

Pro-tip: It is also a good idea to repeat what the prospect describes to show that you are empathizing and would like to help by pushing them to discuss further. It’s best to use storytelling – where you could narrate a similar situation faced by any other prospect to show that you understand.

Research by chorus.ai shows that 34% of discovery calls that include video sharing by sales reps induce at least 24% of prospects to switch on their webcams.

It is a great way to start building rapport with the prospect with whom you have been trying to build trust and authenticity and allows the prospect to have an actual conversation.

You could use questions such as :

What made you choose the industry/ job role you are in right now?”

What do you enjoy most about your job/ industry?

People tend to listen attentively to the voice when they can see the face. They attach value to questions asked, which otherwise might be eschewed.

Also, an interesting stat from Gong.io reveals that webcam usage in close deals is roughly about 41% as against lost sales. Human beings have the propensity to assume. That’s ok; however, the key is to validate what you think is, what it is. Quiz your prospects by asking :

I noticed that you mentioned roadblock X, is it true that it could be the biggest challenge you think is leading to Y?

When you notice a change announced on the company website or in the LinkedIn profile – what is your opinion ( of the change) and how are handling it?

Are you still having trouble fixing the issue?

Could you remind me when is your contract up for the current solution you have in place?

It not only helps sales reps be sure of what they noticed on a company website or in a profile but also provide clarity on inside nuances which might otherwise be misconstrued.

It is good to have a set style guide for yourself or a discovery call script. The number of questions you could ask a prospect should not exceed more than 11-13, and it is no magic number. When talking to the C-suite, you may want to limit your questions to 5-6 and increase the efficiency in terms of listening and building the skill of asking expert questions. It is also crucial that you find an optimal time to schedule a call usually between 3-5 p.m.

Spreading your questions throughout the session, consistently and keeping the prospect engaged by addressing more than one distinct problem point, most importantly gauging if the prospect is educated can significantly help in a successfully closed deal. 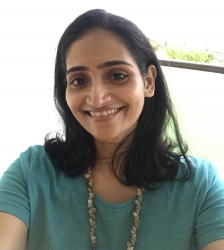 Santhoshi Natarajan
A content strategist at Hippo Video and a communication specialist who is passionate about building content and business network.

[Podcast] Modern Day Skills That Every Salesperson Should Master…

How to Use Video as a “Pattern Interrupt” in…

Cracking the Code to Selling with Videos – A…